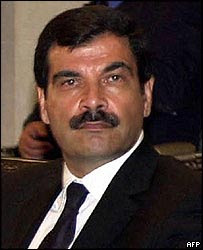 "The mysterious assassination of a top Syrian army officer and right-hand man to President Bashar al-Assad has triggered intense speculation about a crisis inside the Damascus regime over its complex relations with Iran, Hizbullah and Israel.

According to one report, the seaside murder of Brigadier-General Muhammad Suleiman was perpetrated by a sniper firing from a yacht moored offshore.

Suleiman was described by Syrian officials as dealing with defence and security issues in Assad's private office. Israeli and Syrian opposition sources claimed he worked as "liaison" with the Iranian-backed Lebanese group Hizbullah, Israel's sworn enemy.

Suleiman, 49, was killed on a beach near the Syrian resort of Tartous on Friday.......

Assassinations are very rare in Syria and Suleiman's murder was the first since the Hizbullah commander Imad Mughniyeh was killed in February by a car bomb in Damascus, causing huge embarrassment to the regime. Hizbullah accused Israel's Mossad secret service of that assassination but the results of the Syrian investigation have never been disclosed.

Iranian media yesterday quoted "informed sources" as claiming that the sniper was an Israeli. Israel declined to confirm or deny any connection with the killing. But Israeli sources suggested that the ongoing indirect peace talks between Israel and Syria meant this was unlikely to be the case.

Syria's tightly controlled official media did not report on the killing. But Syrian sources confirmed that Suleiman was shot by a silenced weapon in the head and neck on a beach at al-Rimal al-Zahabiyeh resort near Tartous, where, like other privileged Syrians, he owned a chalet. He dealt with "sensitive stuff", said one.

One distinct possibility is that the killing may have been an internal settling of scores. A Syrian with high-level contacts inside the regime linked it to a power struggle between Assad and his military intelligence chief, Assef Shawkat, set off by the Mughniyeh killing.

"After Mughniyeh's assassination the president apparently stripped Shawkat of many of his powers," the source told the Guardian. "Suleiman would have been involved in that process and it was known that Shawkat hated Suleiman." [My comment: some well-connected sources had implicated Shawkat in the Mughniyeh assassination, so it makes sense that he would want to eliminate Suleiman, since he knew the real score.]

Suleiman acted as Assad's point of contact with the army and helped oversee a shake-up of the security services in the weeks leading up to his death, several sources said.

Andrew Tabler, a Damascus-based political analyst, tied Suleiman's assassination to strains over Syria's relations with Iran and Damascus's indirect talks with Israel. "The major issue now facing Syria is its relationship with Iran and Hizbullah and how it can reconcile that with talking to Israel," said Tabler. "The assassination means there is a power struggle going on in Syria and it most probably concerns Iran. People like this don't just die unless something is going on."

Israel makes no secret of its wish to "detach" Syria from its odd-man-out alliance with Iran, demanding that it also sever its ties with Hizbullah and the Palestinian Islamists group Hamas, now controlling the Gaza Strip. Assad wants to improve relations with Washington and is pinning his hopes on the next US administration. Syria's ties with Europe improved following a recent official visit to a Paris summit where Assad was feted by the French president, Nicolas Sarkozy.

Since succeeding his father Hafez in 2000, Assad has sought to purge the security services of much of the old guard, replacing them with his own people. But the regime was thrown into turmoil after the February 2005 assassination of the former Lebanese prime minister Rafiq al-Hariri, which took place when Syria's intelligence services and their Lebanese allies still controlled security in Beirut.

A UN investigation initially accused Syrian and Lebanese intelligence officers of involvement in Hariri's killing. Maher al-Assad and Shawkat were both named in one draft report. In October 2005 Syria's former security chief in Lebanon, Ghazi Kana'an, was found dead in his office, in an apparent suicide that some suggested had been officially encouraged - giving rise to the novel phrase "he was suicided"......"
Posted by Tony at 4:28 AM