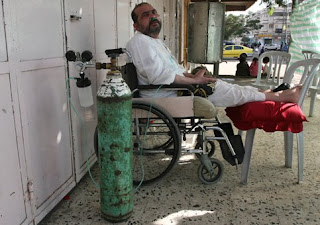 "....Whereas this process raises urgent questions regarding the responsibility of the state of Israel, as Occupying Power, to ensure the health and welfare of the civilian population of Gaza, the present report focuses rather on the mechanisms of denial of access to medical care, on the increasingly central role played by the Israeli General Security Service (GSS, shabak) [1] within this mechanism, and on the coercion of patients in the course of this process.

The report first provides a detailed description of the permits mechanism instituted by Israel at Erez Crossing and of the growing restrictions placed by this mechanism on the access of patients to medical care unavailable in Gaza. Statistical data is provided, based on Physicians for Human Rights-Israel (PHR-Israel)'s January 2007 and April 2008.

The central part of the report describes the policy employed over the past year by the GSS, whereby patients are detained for interrogation at Erez Crossing, and requested either to provide information or to act as collaborators on a regular basis as a condition for permission to exit Gaza for medical treatment. Over the past year, more than 30 testimonies have been received by PHR-Israel, demonstrating this procedure. The methods of coercion employed by the GSS are examined in detail and a description of the growing formalization of the interrogation process is provided, including an attempt by the GSS to coerce PHR-Israel into cooperation with the mechanism described.

The legal implications of the policy and practice of the GSS at Erez Crossing are next explored, employing the definitions of coercion and extortion, the provisions of the UN Convention against Torture and Other Cruel, Inhuman or Degrading Treatment, and obligations pertaining to the right to health.

Following a discussion of the medical-ethical repercussions of GSS policy and a description of the responses of the Israeli High Court of Justice, the Israel Medical Association and PHR-Israel itself to this policy, the report concludes with PHR-Israel's deamnd that GSS immediately cease exploiting the medical needs of Gaza patients for purposes of intelligence-gathering; that the GSS and the army desist from their attempt to coerce PHR-Israel to coordinate patients' and that the Israeli medical community and the Israel Medical Association exercise their influence to bring about an end to the coercive policies of the GSS at Erez Crossing.

Finally, an extensive appendix provides 11 detailed first-person testimonies by patients who underwent interrogation at Erez Crossing, an expert opinion issued by Dr. Bob Brecher of Brighton University, and the responses of the GSS itself and of the Israeli Coordinator of Government Operations in the Occupied Territories to the report."