The lies of Hiroshima live on, props in the war crimes of the 20th century 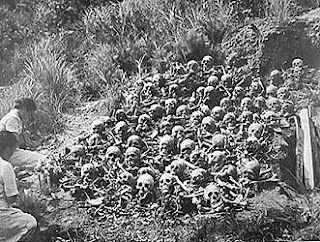 The 1945 attack was murder on an epic scale. In its victims' names, we must not allow a nuclear repeat in the Middle East

"When I first went to Hiroshima in 1967, the shadow on the steps was still there. It was an almost perfect impression of a human being at ease: legs splayed, back bent, one hand by her side as she sat waiting for a bank to open. At a quarter past eight on the morning of August 6, 1945, she and her silhouette were burned into the granite. I stared at the shadow for an hour or more, then walked down to the river and met a man called Yukio, whose chest was still etched with the pattern of the shirt he was wearing when the atomic bomb was dropped......

In the New York Times on July 18, the Israeli historian Benny Morris, once considered a liberal and now a consultant to his country's political and military establishment, threatened "an Iran turned into a nuclear wasteland". This would be mass murder. For a Jew, the irony cries out.

The question begs: are the rest of us to be mere bystanders, claiming, as good Germans did, that "we did not know"? Do we hide ever more behind what Richard Falk has called "a self-righteous, one-way, legal/moral screen [with] positive images of western values and innocence portrayed as threatened, validating a campaign of unrestricted violence"? Catching war criminals is fashionable again. Radovan Karadzic stands in the dock, but Sharon and Olmert, Bush and Blair do not. Why not? The memory of Hiroshima requires an answer."
Posted by Tony at 4:16 AM