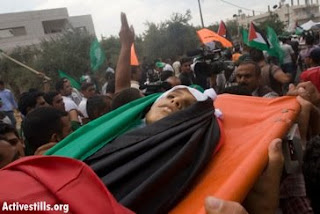 EHUD OLMERT'S resignation speech reached us on our way back from a demonstration.
By Uri Avnery

"We were protesting the death of Ahmad Moussa, aged 10, who was murdered during a demonstration against the Separation Fence at Na'ilin village - the fence that robs the village of most of its land in order to give it to the nearby settlement. A soldier aimed and shot the child with live ammunition at close range.

A short while later, Olmert spoke about his strenuous efforts to achieve peace, and promised to continue them until his last day in office.

The two events - the demonstration and the speech - are bound together. Together they provide an accurate picture of the era: peace speeches in the air and atrocities on the ground........"
Posted by Tony at 4:04 AM