Fury after Israeli officer in charge of prisoner's shooting is 'reassigned' 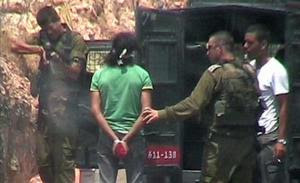 "Outraged Israeli human rights organisations have united in challenging the military's decision to invoke only minor penalties against a senior officer over the shooting of a bound and blindfolded Palestinian prisoner by a soldier under his command.

Lt-Col Omri Burberg has been "reassigned" and was indicted yesterday on the limited charge of "unworthy conduct" after the incident last month in which he held the Palestinian as the soldier shot him at close range in the foot with a rubber-coated bullet. The offence does not carry a custodial sentence.......

Meanwhile an investigation is already underway after a later incident in which a 10-year-old boy, Ahmed Moussa, was shot dead with a live bullet after another demonstration at Ni'ilin [any wild guess how this other "investigation" is going to turn out?]."
Posted by Tony at 3:19 AM