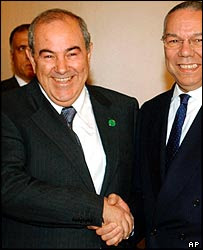 What was an Iraqi politician doing at CIA headquarters just days before he distributed a fake memo incriminating Saddam Hussein in 9/11?

"Aug. 8, 2008 If Ron Suskind's sensational charge that the White House and CIA colluded in forging evidence to justify the Iraq invasion isn't proved conclusively in his new book, "The Way of the World," then the sorry record of the Bush administration offers no basis to dismiss his allegation. Setting aside the relative credibility of the author and the government, the relevant question is whether the available facts demand a full investigation by a congressional committee, with testimony under oath.

When we look back at the events surrounding the emergence of the faked letter that is at the center of this controversy, a strong circumstantial case certainly can be made in support of Suskind's story......
On Dec. 14, 2003, the Sunday Telegraph hyped the phony Habbush memo as a front-page exclusive over the byline of Con Coughlin, the paper's foreign editor and chief Mideast correspondent, who has earned a reputation for promoting neoconservative claptrap. As I explained in a Salon blog post on Dec. 18, the story's sudden appearance in London was the harbinger of a disinformation campaign that quickly blew back to the United States.......
But the credulous Telegraph coverage is still significant now, because Coughlin identified the source of his amazing scoop as Ayad Allawi. For those who have forgotten the ambitious Allawi, he is a former Baathist who rebelled against Saddam, formed the Iraqi National Accord movement to fight the dictator, and was appointed to Iraq's interim Governing Council by the U.S. occupation authorities after the invasion.......

So Allawi was at the CIA during the week before Coughlin got that wonderful scoop. That may not be proof of anything, either, but a picture is beginning to form.

That picture becomes sharper in the months that followed Allawi's release of the Habbush forgery, when he suddenly returned to favor in Baghdad and eclipsed Chalabi, at least for a while....."
Posted by Tony at 5:20 AM