Obama Up Against the Middle East 'Berlin Wall' 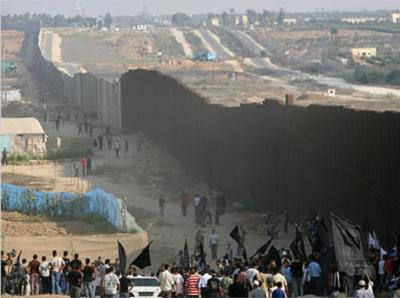 "People of the world -- look at Berlin, where a wall came down . . . and history proved that there is no challenge too great for a world that stands as one" -- Barak Obama.

On July 24, Barak Obama stood where a 96-mile-long wall of barbed wire and concrete once separated the ideologies and lives of East and West Berlin. He told a crowd of 200,000 that “history reminds us that walls can be torn down” and that the “greatest danger of all is to allow new walls to divide us one from another.”

He reminded the crowd that sixty years ago this summer, the Soviet Union “cut off food and supplies to more than two million Germans in an effort to extinguish the last flame of freedom in Berlin. That [was] when . . . the largest and most unlikely rescue in history brought food and hope to the people of this city.”.....

Dov Weisglas, a senior Israeli government advisor, was candid, if not boastful, regarding Israel’s unconscionable policy of cutting off food and supplies to the walled areas, “The idea is to put the Palestinians on a diet, but not to make them die of hunger.” Anyone with an unblinkered view of the Zionist vision will understand Weisglas to mean, “The idea is to make their lives so intolerable that they lose hope and “choose” to go somewhere . . . anywhere . . . else.”

If ever there was a need for an airlift to breech a wall and succor a desperate people it is now. It is Palestine......"
Posted by Tony at 4:54 AM