Because the Pharaoh Has No Balls: Palestinians stranded at Rafah terminal go on hunger strike 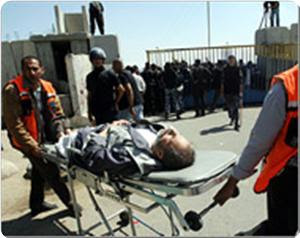 "RAFAH, (PIC)-- Palestinians trapped at the Rafah border terminal between Gaza Strip and Egypt have gone on hunger strike to protest the Egyptian authority's continued refusal to open the border for them.

They said in an urgent appeal sent to the PIC on Wednesday that they have been suffering for the past few months on the border terminal and have been sleeping in the desert in the open. They said that out of their total number of 150 persons they group old people and women who suffer chronic diseases such as diabetes, hypertension and heart ailments.

Many of the young men suffer from skin and other diseases, they said, adding that they did not have any medication except sedatives and other simple medicines.

They also said that many suffer malnutrition and scarcity of potable water, and appealed to human rights groups to end their ordeal.

They asked local and foreign media to shed light on their plight in a bid to solve their problem."
Posted by Tony at 6:01 AM