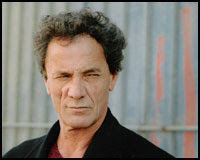 "Mohammed Bakri, the Israeli-born director of the film 'Jenin, Jenin', has been acquitted of all charges by an Israeli judge. Bakri had been sued by Israeli soldiers who said his account of a 2002 Israeli invasion of Jenin refugee camp was 'inaccurate', and that the movie was 'incitement'.

Bakri is a well known Palestinian-Israeli director and actor, who performed in many Israeli films. After producing the documentary film 'Jenin Jenin', in which he interviewed Palestinians who experienced the 2002 Israeli invasion, Bakri has been blacklisted by the movie industry in Israel and sued by a group of Israeli soldiers.

The Israeli judge who ruled in the case stated that the individual soldiers could not sue Bakri, because his movie did not specifically name them, or any soldiers, but talked about the Israeli military as a whole.....

Bakri stated after the ruling that the movie was an attempt to give voice to the residents of Jenin, to allow them to speak about the assault on the camp.

The soldiers who sued Bakri claimed that they were just trying to defend their homeland, not to assault a refuge camp. But Bakri, in an interview, responded that, “They are not fighting for their homeland. They are fighting for the settlements. They are fighting to defend the occupation. They mustn’t be there. They mustn’t be in the West Bank. They mustn’t be in Gaza. This land was occupied in 1967” and that “this is not the right way also to fight the terrorists, by this, by demolishing houses and by that very cruel invasion.”

Bakri has recently finished another movie called 'Since you Left'. The movie is a personal documentary describing the harassment that Bakri has experienced since making 'Jenin Jenin'. "
Posted by Tony at 5:31 AM