The 8 Fallacies of Bush’s Abbastan Plan 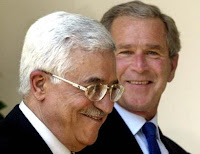 A Superb Piece
By Tony Karon

"“Hello, Condoleezza Rice,” the Hamas gunman joked, speaking into the President Mahmoud Abbas (a.k.a. Abu Mazen)’s phone from the Palestinian Authority president’s chair in his abandoned Gaza office. “You have to deal with me now, there is no Abu Mazen anymore.”

Never a truer word spoken in jest, and all that…

But the Bush administration doesn’t get the joke. Bush and Condi would now have us believe that in fact some kind of opportunity has arisen to promote “peace” between Israel and the Palestinians by starving the Gazans and ignoring the political party in which Palestinian voters placed their confidence 18 months ago, while pumping cash into a new authoritarian regime under U.S. tutelage headed by Mahmoud Abbas in the West Bank......Hamas has made clear ever since winning the election that it wants to engage with the West, most recently in a New York Times op-ed from a key adviser to Prime Minister Ismail Haniyeh. It is the U.S. that has — to the point of criminal irresponsibility — refused to consider it......

But Paul Woodward makes a persuasive case that this was not merely an ad hoc response — the rapidity with which the new policy fell into place was a sure sign that it follows a script long in the making in the White House Mideast policy shop of Elliot Abrams, seasoned veteran of Reagan’s Dirty Wars in Latin America during the 1980s.

The new policy is dysfunctional and ultimately self defeating because it is based on eight connected fallacies......

Even after last week’s events in Gaza, Hamas recognizes Abbas’s legitimacy as President. But it contests the legality of his installing a new emergency government that excludes Hamas. Abbas may be “legitimate” in Western eyes, and those of the Arab regimes as averse to democracy as Fatah has been, but the actions he has taken at the behest of Bush and Rice have little legitimacy in the eyes of the Palestinian street. Washington assumes that if Abbas can be bolstered as a kind of Palestinian Musharraf, given plenty of cash to buy support, that the Palestinians can be persuaded to accomodate themselves to Israel’s terms. There’s nothing in reality to indicate that this is a valid assumption......

But whatever good intentions are mouthed at the handover, the point is that the corruption will be most rife among the very security services and warlords on whom the U.S. strategy is going to depend for its success. It’s a safe bet that the venality of those answering to Washington will be overlooked because of the security it is deemed to provide.

But the Palestinians have had a taste of democracy; they’re unlikely to accept outsiders telling them who their leaders are any more. The idea that any sort of peace agreement can be concluded between Israel and the Palestinians while ignoring the party the Palestinians elected to govern them is a particularly dangerous fantasy......

....In short, the ever-hapless Abbas will find himself caught between Condi Rice, the warlord Dahlan, and the remnants of his movement led by Barghouti seeking a rapprochement with Hamas. And Abbas will simply retire to his home in Qatar.....

Hamas retains the political momentum among the Palestinians, and what the U.S. has planned is likely to strengthen rather than weaken Hamas politically — it always does, after all. The U.S. has failed to recognize that it’s open support for a Palestinian faction is a political kiss of death.......So, Fatah’s grip on the West Bank, measured in hearts and minds, is, in fact, tenuous, and likely to weaken in the face of the new U.S. policy......

Hamas will not suffer politically as a result of Israeli-American efforts to starve and bludgeon the Palestinians into submission. Indeed, open support from the U.S. has become something of a kiss of death for Palestinian leaders, as the last election showed, where Washington suddenly began pumping money into Fatah....."
Posted by Tony at 10:36 AM