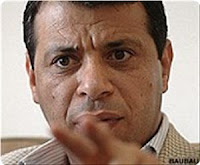 "GAZA, (PIC)-- Palestinian MPs accused the mutiny trend's leader in Fatah faction MP Mohammad Dahlan of involvement in the assassination of the late PA chief Yasser Arafat, and in the shooting at the motorcade of PA premier Ismail Haneyya as well as the Egyptian security delegation in Gaza.

"Hamas obtained serious documents conclusively proving Dahlan's involvement along with his band in the assassination of the late PA chief Abu Ammar," Faraj Al-Ghoul, chairman of the legal committee of PLC, charged in a press statement to the Sharjah-based Khalij newspaper.

"The documents convict Dahlan of corruption, and establishing death squads. In addition, we have confessions of the leaders of the preventive security apparatus who have been arrested in Gaza recently", Ghoul revealed, calling for a fair trial for Dahlan and his partners and an honest investigation into the evidence and documents.

For his part, the spokesman of the Hamas-affiliated change and reform bloc in the PLC, Mushir Al-Masri confirmed to the same newspaper, that Dahlan and his group were behind the shooting at the Egyptian security delegation in Gaza and the motorcade of PA premier Ismail Haneyya last February.

Masri also stated that Hamas welcomed the formation of "a fact-finding committee" by the Arab League, and underlined that the Egyptian security delegation is "fully informed of what happened and is happening" in the Gaza Strip."
Posted by Tony at 4:13 AM