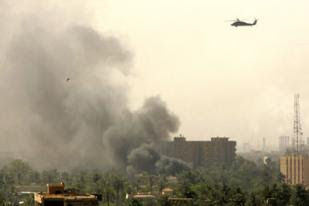 "A series of mortar bombs has hit Baghdad's Green Zone and smoke could be seen rising from buildings near the Iraqi parliament and government offices.

At least seven mortar rounds were counted, slamming into the Green Zone in the centre of the Iraqi capital on Thursday morning.

The origin of the smoke was not immediately known and it was unclear if there were any casualties......

The Green Zone, on the west side of the Tigris, is Baghdad's most secure area but has been a frequent target for rockets and mortar bombs.

The strikes have become more frequent and more accurate recently......"