The desecration of democracy 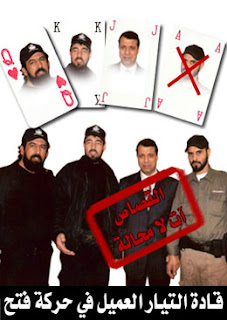 An image presumably distributed by Hamas sympathizers reads, "Punishment has come/ The leadership of the collaborationist faction in Fatah."

"......Part of a conquer and divide strategy is timing. Why did Israel wait until this moment to consider Mahmoud Abbas a "partner committed to peace" when his positions have hardly changed since his election over two years ago? Why is Israel only now considering freeing Marwan al-Barghouthi, a convicted Fatah activist? Why only now release the frozen government taxes ($570 million) that the Palestinians have desperately needed since Israel started withholding them in March of last year?

On Monday Haaretz's Akiva Eldar wrote, "If Ariel Sharon were able to hear the news from the Gaza Strip and West Bank, he would call his loyal aide, Dov Weissglas, and say with a big laugh: 'We did it, Dubi.' Sharon is in a coma, but his plan is alive and kicking. Everyone is now talking about the state of Hamastan. In his house, they called it a bantustan, after the South African protectorates designed to perpetuate apartheid."

Just as in the Palestinian territories, blacks and colored people in South Africa were given limited autonomy in the country's least fertile areas. Those who remained outside these isolated enclaves, which were disconnected from each other, received the status of foreign workers, without civil rights. A few years ago, Italian Foreign Minister Massimo D'Alema told Israeli friends that shortly before he was elected prime minister, Sharon told him that the bantustan plan was the most suitable solution to our conflict......"
Posted by Tony at 10:08 AM