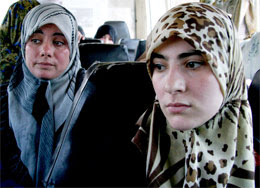 Over 25,000 Palestinian civilians fled Nahr al-Bared on buses and by foot since the outbreak of fighting between the Lebanese army and Islamist militants on May 20. (Hugh Macleod/IRIN)

"BADDAWI REFUGEE CAMP, NORTH LEBANON, 20 June 2007 (IRIN) - Tens of thousands of Palestinians have fled the Lebanese army's month-long siege and shelling of the north Lebanon Nahr al-Bared refugee camp, as its battle against Islamist militants continues. But one 16-year-old Palestinian student told IRIN his worst ordeal began after he escaped the camp. About 10 men he identified as soldiers and police were standing at a junction leading to the village of Muhammara, above Nahr al-Bared. "They asked to see my identity card," said the boy, who requested anonymity for fear of retribution....."
Posted by Tony at 9:21 AM