Why the US has lost 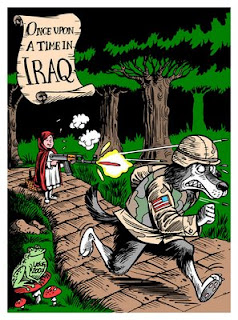 "Resistance in Iraq is reported to be growing in size and spreading in its capacity to operate in an increasing number of provinces, blooming in further parts of the Iraqi territory. According to the US, it is by the intervention of foreign fighters. In reality, it is the revival of Iraqi nationalism and dignity. While the occupation and its lackey government continues to indiscriminately and massively incarcerate Iraqi citizens "suspected" of ties with the resistance, it seems unable to break its different expressionsarmed, political and popularor to break the sympathy it enjoys from the population. Daily, ever larger movements of opinion express their rejection of the occupation and its puppet government. Despite spending billions in war funding and propaganda, how did the American imperial plan fail in Iraq?

First of all, its failure is due to the inability of the US administration to recognise the impossibility of breaking Iraq up into smaller conflicting states. The neocon adventure and miscalculation is based on several factors, including taking their wishes as realities, their blind and sole reliance on military force to achieve their agenda, the gathering of information from some marginal and alienated Iraqi exiles, and their avoidance of studying the historical, cultural and social characteristics of the country they were about to invade and aimed to control. Prior to the invasion, and throughout these four disastrous years of occupation, the US underestimated the strength and deep-rooted character of Iraq's nationalism and culture, which was bound to face US imperialist plans with steadfast resistance, emanating from all sections of Iraqi society, including the supposed bases of their allies......

It was evident that the US and its allies, even before the invasion were running after an illusion. Why would the Iraqi people accept and welcome a plan that would deprive them and only benefit a few? The marginalised and impoverished, the educated middle classes, the working classes, which lost the benefit of nationwide services, women and the youth, which suffers from unemployment and the absence of civil liberties, all reject US policy in Iraq. This is the source of what now and into the future will be a never-ending social struggle against the occupation and eventually its defeat, and the defeat of its policies. Without the middle class, the US cannot build a functioning state; the Iraqi middle class, all parts included, clearer and bolder, and with it the labouring classes, rejects the US occupation and its plans.....

Why all this waste? American strategists, while building their model for Iraq, missed or disregarded the fact that social movements are based on solid realities and lived experience, and cannot just be created on the whim of a political decision, through insidious forms of pressure or by an all-out military assault on a poor population. By thinking that they could win in Iraq, US administrators, think tanks, strategists and tacticians have only proven their simple arrogance and ignorance. They should read history, and analyze the objective realities. No foreign power was ever able to control Iraq. Iraq is a small country with great dignity, a sophisticated ancient civilisational legacy, and a very experienced national patriotic movement. The US cannot break this people's will to live free and sovereign on its land, and over its resources, as all other peoples in the world. They should have asked the British."
Posted by Tony at 12:01 PM