Underscoring the Clown King's Committment to Democracy and Free Elections, Jordan Coordinates with Egypt, Saudi Arabia Over Developments in PA 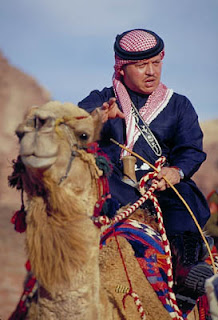 "Jordanian Prime Minister Marouf Bakhit said Tuesday his country was coordinating with Egypt and Saudi Arabia on how to deal with the repercussions of the Palestinian situation that resulted from Hamas' takeover of the Gaza Strip.

"King Abdullah is involved in moves at all levels in coordination with the Arab brethren, particularly Egypt and Saudi Arabia, in addition to His Majesty's contacts on the international arena," Bakhit told a press conference.

Al-Bakhit reiterated Jordanian "concern" about regional instability.
"What happened recently in the Palestinian territories is regrettable to the point of sadness," he said. "The scenes of violence and crimes are set to harm the Palestinian people's struggle and sacrifices over the past decades for the sake of the establishment of a Palestinian state with Jerusalem as its capital," he added.

Bakhit said his country would continue to back the Palestinian Authority and President Mahmoud Abbas because "we do not deal with factions.".....

"We won't tolerate an extension of those factions (Hamas) on our soil and we will deal seriously with them because we consider them illegal," al-Bakhit said. "Our national security is a top priority. Jordan is a strong state, we're not concerned about this matter at all," he added......"
Posted by Tony at 11:37 AM