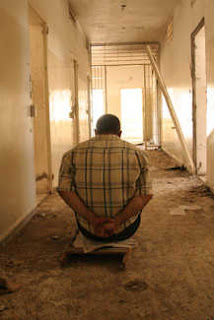 "GAZA CITY, Gaza Strip — They called it "The Bus" and it marked the beginning of days, weeks, even months of brutal interrogation at the hands of the nascent Palestinian government.

After being rounded up by Fatah forces, Hamas men were blindfolded and shackled to a line of uncomfortable, low chairs while their captors blasted "dirty" music to soften their psychological defenses. Then, one by one, they were beaten, questioned and thrown in cells.

"Torture by the Israelis was less than what they did here," said Hassan, a 46-year-old high school physics teacher who would give only his first name. He said he was held by Fatah for 59 days in 1996.

For Hamas members, the gutted prison bloc in the back of the Gaza City headquarters of the Palestinian Authority's Preventive Security Service was their Abu Ghraib.

It was here that the seeds of the rivalry with Fatah were planted a decade ago. And it was here last week that Hamas broke the spirit of Fatah forces and sealed its military victory.

As soon as the compound fell, onetime inmates started turning up to visit the reviled prison bloc.

Among the first was a man who called himself Abu Essam, a stout, bearded, 54-year-old colonel with the Palestinian Authority National Security Services. He said he spent two years inside these cells.

At first, Abu Essam was hired to oversee the interrogations in 1994, soon after Palestinian leader Yasser Arafat triumphantly returned to Gaza to build the foundations for a future state.

When it became clear that he was reluctant to use harsh methods, he was thrown in a cell himself for six months.

Abu Essam's arrest was part of a prolonged Fatah crackdown on Hamas and its leadership, many of whom spent time in this jail.

The prison was then overseen by Mohammed Dahlan, the young Fatah leader and Gaza Strip enforcer charged with building the security system from scratch.

Hamas members said Fatah interrogators tortured them and shaved their beards to humiliate them. "This system was used only to target those with beards," said Abu Essam.

To this day, Dahlan is one of the most reviled Fatah figures in Gaza, and his home was one of the first to be looted and torched when Hamas took control last week.

Abu Essam began his political life as a Fatah loyalist. For 14 years, he backed Arafat's party and spent 15 years in Israeli prisons because of it.

Slowly, though, Abu Essam began to view Fatah as a group without morals or vision, and he disavowed the party in 1986. "It became so corrupt, they became a mafia," he said.

Abu Essam was arrested again by the Palestinian Authority in 1998. He spent 18 months in cell number 22, one of 30 on this cell block. The dingy, tan walls are covered with graffiti scratched into the cement by the prisoners.

On one wall, a bearded man peers out from behind iron bars. A chilling, eyeless face peers out from the door of another. One inmate carved a sarcastic message to his captors, in Hebrew: "Preventive Security Prison, I love you to death."

As Abu Essam stood in the ruins of the prison, another former inmate with a limp came rushing through. "This is where they had 'The Bus,'" said the man grimly.

The two exchanged stories of their days behind bars and realized that they had been held here at the same time.

Last week, the compound was the site of perhaps the biggest battle in the five-day civil war. Signs of the fight are everywhere. A large hole was blasted in the compound wall at the point where Hamas probably stormed inside.

The halls and offices are littered with broken glass, memos and abandoned sandals. In one room near Dahlan's old office, the floor is covered with black ash and the binders of dozens of old folders, an indication, perhaps, that Fatah had torched some of its key classified files before Hamas overwhelmed the compound.

"I feel so sad to see the building burned," said Abu Essam before heading off. "But we were obligated to do it because of their crimes.""