Palestinian Karzai , Olmert to meet in Egypt on Sunday 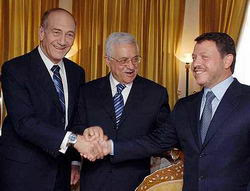 According to an aide close to Abbas, Yasser Abed Rabbo, "the invitation came from President Mubarak of Egypt."

The purpose of the summit is to reopen diplomatic channels between Abbas and Olmert. It is hoped that the meeting will be a means to revive the peace process.

Rabbo stressed that the Palestinians want concrete results. As he told the Associated Press: "We want the summit to remove the [economic] siege and the checkpoints that suffocate the life of the Palestinian people."

With Hamas seemingly no longer part of the equation, the prospect of a renewed dialogue may become reality, as US President Bush and Olmert have agreed to support Abbas and his newly appointed government.

Wednesday saw the fist high-ranking contact between Israel and the new Palestinian government, when Salam Fayyad, the new prime minister for the PA, and the Israeli minister of foreign affairs, Tzipi Livni, talked over the phone.