Egyptian paper: Documents show Dahlan was working with AlQaeda with the idea of blaming trouble on Hamas 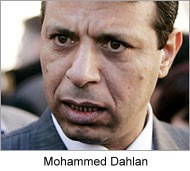 "Hamas has turned over to the Egyptian authorities substantial parts of the intelligence information that fell into its hands when it overran the headquarters of Fatah-controlled security headquarters in Gaza on Thursday, according to what sources told the Egyptian newspaper Al-Masriyoun. This is the first reported use of the information in question, which has been a topic of speculation.

The sources said the documents include information about the involvement of the group of Dahlan and Shabak in cooperating in an organized way with the Mukhabarat of Israel and America, including attempts to inundate Egypt with drugs smuggled from Israel via Gaza, and the distribution of hundreds of thousands of counterfeit dollars in tourist areas of Sinai, to damage tourism in the area.

The documents also refer to the role of Dahlan in inciting Bedouins of Sinai to threaten to support Israeli policy, and to involve their people in smuggling members of "terrorist organizations" into Sinai to undertake operations against tourist installations there, both to hurt Egyptian tourism for the benefit of Israeli tourism, and also to cause trouble between Egypt and Hamas on the assertion that these persons were followers of Hamas.

The sources said the documents also show that Dahlan commissioned a large number of Fatah people to work in other Arab countries, including Egypt, to gather intelligence which was passed on to Mossad and to the Mukhabarat of America. And that he gave orders for wiretapping the Egyptian mission in Gaza and its communications with Cairo, and of an Egyptian security delegation, in addition to his involvement in the kidnapping of a member of that delegation last year, Hissam Muwassali later released as a result of Egyptian pressure.

The documents also show the involvement of Dahlan in bringing down a number of top Hamas people, via placing of advanced electronic equipment usable by Israeli planes to determine their location and kill them, as happened in the case of Ahmed Yasin, Dr Abdulaziz al-Rantisi and others. And his involvement with Mossad in administering slow poison to Yasser Arafat in order to eliminate him......."

Here is the original Egyptian paper source (Arabic) which was supplied earlier by Fatima: