Ezra: Barghouti should be released in order to aid Abbas 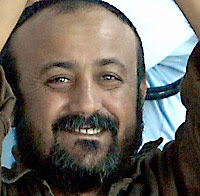 In an interview with Israel Radio, Ezra maintained that "Abbas is lacking support." Referring to jailed senior Fatah leaders, many of whom enjoy wide support in the West Bank, the minister said, "if these people are in prisons, they must be freed. I would have freed Barghouti a while ago. Abbas needs able leaders in addition to [current Prime Minister]Salam Fayyad.".......

A group of senior Fatah officials from the West Bank recently began promoting an initiative aimed at persuading Abbas to remove his national security adviser and associate, Mohammed Dahlan. Jailed former commander of Fatah's Tanzim force, Marwan Barghouti, is among those urging the change.

The officials, all belonging to Fatah's Revolutionary Council, are demanding Dahlan's removal due to what they perceive as his failure to engage Hamas militarily in the Gaza Strip and prevent the organization from ousting Fatah from power there......

Palestinian sources said that the subject came up at a meeting of 20 council members in Ramallah on Sunday. According to sources, some of the council members said they believed that Dahlan should be relieved of his duties as part of Fatah's efforts to regain strength on the Palestinian street......."...Dahlan is among those responsible for this debacle, and even his own men are saying that he had deserted them along with Fatah's top-brass in the strip""
Posted by Tony at 4:53 AM