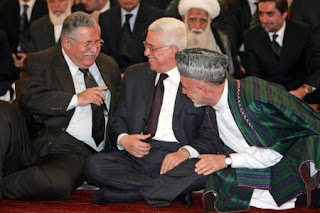 "Bethlehem - Ma'an – The Israeli authorities have announced that Israel intends to transfer between 400 million and one billion US Dollars to the Palestinian Authority within the next few weeks.

Israeli Channel Two reported late on Friday evening that Israeli Prime Minister Ehud Olmert "has the intention to start final status negotiations in the coming months, on the condition that [President] Abbas must fight Hamas."

Israeli political analysts claimed that "there are many steps under preparation, agreed upon by [US President] Bush and [Israeli Prime Minister] Olmert, including a joint plan against the Hamas movement on the political, economic and security levels".

It was further reported that Jordan will be asked "to pay more attention" to the West Bank, "and help in solving its problems", while Olmert will request Egypt "to make a clear position regarding the Gaza Strip, especially in regard to the crossings.""

Could the plan be more clear than this??
Posted by Tony at 5:52 AM