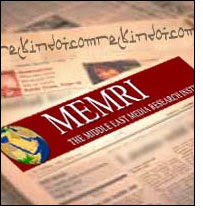 "As we have known for some time now, MEMRI, short for the Middle East Media Research Institute, specializes in disinformation by distorting translations of film and print media stories originating in Arabic, Iranian and Turkish media. In essence, what MEMRI does is change the context of news stories by way of mistranslation and excision. Call it MEMRI loss, the deliberate mangling of media......

.....In other words, Olmert used the MEMRI lie as the cornerstone for his argument that Iran must be attacked and Bush agreed. It wasn’t long ago the neocons made up similar lies about Saddam Hussein, lies that have so far resulted in the murder of more than 750,000 Iraqis.

For those of us who know something about history, these neocon lies may be accurately compared with the lies and disinformation used by the Nazis to ultimately invade countries and slaughter millions of people. MEMRI, according to Norman G. Finkelstein, employs “the same sort of propaganda techniques as the Nazis. They take things out of context in order to do personal and political harm to people they don’t like,” or people Likudniks and neocons want the United States military to mass murder.

Finkelstein had a close encounter with MEMRI in 2006, when “he gave a TV interview in Lebanon on the way the Nazi Holocaust is used to silence critics of Israel,”.....

“MEMRI is a main arm of Israeli propaganda,” explains Finkelstein. “Although widely used in the mainstream media as a source of information on the Arab world, it is as trustworthy as Julius Streicher’s Der Sturmer was on the Jewish world.” Ken Livingstone, mayor of London, accuses MEMRI of “outright distortion,” while former CIA case officer Vince Cannistraro has written that “they (MEMRI) are selective and act as propagandists for their political point of view, which is the extreme-right of Likud,” in other words, the people associated with MEMRI—David Wurmser, Douglas Feith, Elliot Abrams, Richard Perle and other neocons—are racist reactionaries, no different than the above mentioned Julius Streicher (instead of hating Jews, the neocons hate Arabs and Muslims).......

Naturally, when the depleted uranium tipped bunker busters and cruise missiles begin taking out grandmothers and babies in Iran, MEMRI, the mass murdering Likudniks and neocons will be to blame.

However, instead of justice, the perps will likely move on to teach a new generation of psychopaths at Georgetown University or retire to palatial estates on land ethnically cleansed of Palestinians."
Posted by Tony at 6:17 PM