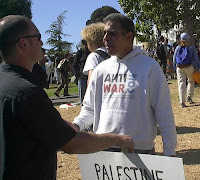 Brothers under the skin

"The idea that we invaded and occupied Iraq and launched a bid to "transform" the Middle East because we wanted to install liberal, democratic societies in the region is just not believable on many levels, and certainly recent headlines about the Palestinian coup by Fatah against Hamas – and the president's endorsement of the Abbas putsch – underscore this point. One year after Hamas soundly defeated the old, corrupt Fatah movement at the polls, the former has been expelled from the government by the unilateral action of "President" Abbas and is outlawed in the West Bank – where the Fatah-Bush theory of the "unitary presidency" apparently holds sway.

"Democracy" in the Middle East marches on!.....

Elections in the Middle East are like those in the European Union – if the Powers-That-Be don't get the result they want, then the results are overturned and a new election is held… a process that continues until the people learn their lesson, i.e., that resistance is futile, and ratify what has already been decided.

From the occupied territories to the war-torn cities of Iraq, what was sold as an effort to export "democracy" has instead turned into an effort to import chaos, death, and universal destruction.....

Every new day's headlines reminds me of a prescient piece by Joshua Marshall, published in the April 2003 issue of The Washington Monthly, entitled "Practice to Deceive," the subtitle of which was "Chaos in the Middle East is not the Bush hawks' nightmare scenario – it's their plan." Marshall pointed to:

"[T]he curious fact that much of what could go awry with their plan will also serve to advance it. A full-scale confrontation between the United States and political Islam, they believe, is inevitable, so why not have it now, on our terms, rather than later, on theirs? Actually, there are plenty of good reasons not to purposely provoke a series of crises in the Middle East. But that's what the hawks are setting in motion, partly on the theory that the worse things get, the more their approach becomes the only plausible solution.".....

Where will it all end? The goal of the neocons is a U.S.-Israeli-dominated region, patrolled by U.S. troops and divided into a large number of much smaller statelets. With both Iraq and Iran broken down into their constituent ethno-religious parts, the Middle East becomes Lebanon writ large: weak, vulnerable to attack, and easy to control. A central premise of the "realist" critique of the neoconservative agenda is that it promotes a dangerous instability, which shows that the realists just don't get what neoconservatism in the foreign policy realm – and particularly when it comes to the Middle East – is all about. The idea is to create – and preside over – a condition of permanent instability. There is no better way to justify the permanent presence of U.S. troops and plenty of aid to U.S.-backed authoritarian regimes......

While it may be somewhat of an exaggeration to say that we no more have "democracy" here than the Palestinians have it in the West Bank and Gaza, it isn't all that much of one......"
Posted by Tony at 1:19 PM