Netanyahu calls for deployment of Jordanian troops in West Bank 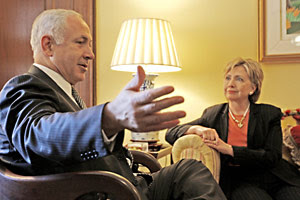 Netanyahu told reporters during a visit to Washington that he believes that Jordan and Egypt are the key to stabilizing the Palestinian government in the territories.

The Likud chairman added that Egypt must significantly increase its efforts to prevent arms smuggling across its border into the Gaza Strip.

Meanwhile, the United States Congress is pressuring Egypt to halt the arms trafficking, with lawmakers demanding that Secretary of State Condoleezza Rice to use new methods in order to apply pressure on Egypt.

The lawmakers are threatening to partially halt the transfer of American foreign aid to Egypt due to its failure to act effectively against the smuggling.....

Several dozen senators are also expected to send Rice a letter calling on her to act with utmost determination in order to convince the Egyptians to prevent smuggling across the Philadelphi Route.

Connect the dots and you clearly see the outline of the bigger plan:

A "final solution" will be imposed on the Palestinians that takes away most of their rights. The Palestinian Karzai has assumed dictatorial powers and has effectively thrown out the PLC and the elected government as well as the Palestinian "Basic Law." Thus, as the Palestinian "Decider" he has put himself in the position to sign this final capitulation. Of course he will use his PLO cronies to rubberstamp the deal.

Anticipating rebellion among Palestinians, in both Gaza and the West Bank, that is where the obedient U.S. client states of Egypt and Jordan come in. The current planned and organized chaos in the W.B. will be used as the justification to introduce Jordanian troops (as Netanyahu has asked) in order to "strengthen Abbas."

In Gaza, the screws are being tightened on Egypt and the big guns of Congress are being brought to bear. I don't think the issue is that of the so-called arms smuggling; that is blowing smoke. I think that the U.S. wants Egypt to send troops into Gaza to fight Hamas, but Egypt has balked so far. That is why the pressure is intensifying. Ultimately Mubarak, as all obedient puppets, will agree to send Egyptian troops into Gaza, perhaps with an Arab League or a UN fig leaf.

Fasten your seatbelts, the end game as Usrael sees it is approaching and all efforts are being marshaled to crush the Palestinians and their rights.
Posted by Tony at 2:14 PM