"They see us all as criminals" 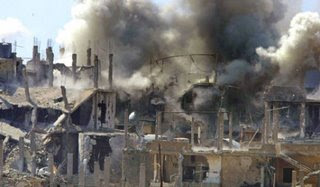 "Standing at the entrance to Nahr al-Bared Camp a week ago in the still, oppressive heat waiting with Fatme for her sister and her nieces to be evacuated, we watched as two large army trucks emerged from the camp. Though the backs of the trucks were covered with tarpaulin and soldiers forbade the assembled journalists from filming, as the trucks roared by we could see that each contained about thirty men and boys, handcuffed, some blindfolded, most with their heads bent down towards their laps. One youth, however, sat with his head held high, staring back at the camp, with a tasseled kuffiya draped around his shoulders. His small act of defiance and pride, of rejecting the criminalization of his people and struggle, reduced Khadija, who stood next to me, to tears as she said "I am so exhausted, I feel burnt inside, as if all beauty is gone from my life, but seeing him makes me understand that I can't despair, that I have to stay strong -- to rebuild our camp and our lives."......"
Posted by Tony at 10:22 AM