Usrael and Puppets Rushing Help to The Palestinian Karzai 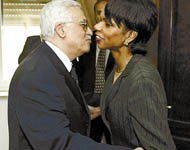 The Kiss of Death

"The most important thing to realize is that time is of the essence," Erekat said. "We need to deliver the end of occupation, a Palestinian state. If we don't have hope, Hamas will export despair to the people."......

Olmert reached an understanding with United States President George W. Bush during his visit to Washington on Tuesday that it is necessary to support Abbas, a senior political source in Jerusalem said Wednesday.

The decision to aid Abbas was made despite skepticism about his chances for success, in view of past experience. Olmert and Bush agreed they must not allow the impression that Abbas failed because Israel or the U.S. failed him......"
Posted by Tony at 5:38 AM