Fourteen US soldiers killed in two days in Iraq 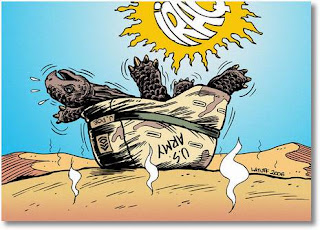 "BAGHDAD, Iraq (AFP) - Fourteen US soldiers have been killed in two days of fighting, the military announced on Thursday, as US-led troops continued to press simultaneous offensives in and around Baghdad......

On Thursday five US soldiers, an Iraqi interpreter, and three Iraqi civilians were killed when a roadside bomb exploded near their vehicle in northeastern Baghdad, the military said in a statement.

A sixth soldier and two Iraqi civilians were wounded in the attack.

Another soldier was killed and three others wounded in Baghdad on Thursday when their vehicle was hit by a rocket-propelled grenade.

On Wednesday six soldiers were killed in two separate roadside bomb attacks in western Baghdad, and two marines were killed in combat operations in the western Anbar province.

The latest deaths bring total US casualties for this month alone to 59, with at least 3,536 since the March 2003 invasion, according to an AFP count based on Pentagon figures."
Posted by Tony at 7:46 AM