The CIA and Fatah; spies, quislings and the Palestinian Authority 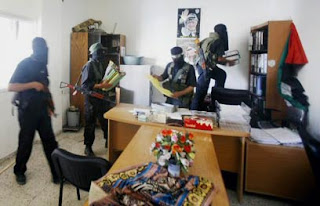 ".......They also discovered something far more valuable--- CIA files which purportedly contain "information about the collaboration between Fatah and the Israeli and American security organizations; CIA methods on how to prevent attacks, chase and follow after cells of Hamas and the Committees; plans about Fatah assassinations of members of Hamas and other organizations; and American studies on the security situation in Gaza." (Aaron Klein, WorldNetDaily.com)

If the documents prove to be authentic, they will confirm what many critics of Fatah believed from the beginning; that US-Israeli intelligence agencies have been collaborating with high-ranking members of the PA to help crush the Palestinian national liberation movement. The information could be disastrous for Palestinian President Mahmoud Abbas and his newly-appointed "emergency government". It could destroy their credibility before they even take office......

Former Middle East CIA operations officer Robert Baer, who was interviewed in the article, said that the discovery of the documents was "a major blow to Fatah" and will show "a record of training, spying on Hamas".....

Imagine what a headache it will be for the Bush administration if Hamas exposes the broader network of US spies and Arab quislings operating throughout region.....

....The uncovering of the CIA documents in Gaza will cast a cloud over the administration’s largesse and make Abbas look like a Palestinian Karzai who gets financial treats from Washington to follow their diktats......

The key issue here is whether democratic elections have any real meaning or if they can simply be rescinded by executive decree? This question should be as relevant to Americans as it is to Palestinians. After all, both people now face a similar predicament; the flagrant abuse of executive authority to enhance the powers of the president. In both cases, the president must be forced to conform to the law. Democracy cannot be decided by fiat......"
Posted by Tony at 2:21 PM