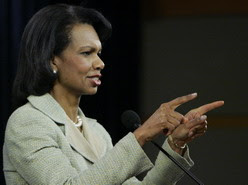 Recent events have quickly resulted in a situation which many people have been urging Hamas to bring about by itself. Hamas resisted the dissolution of the PA and kept pursuing the mirage of "national unity" with the people it knew of being collaborators with Israel and stooges who get their instructions from the CIA. Now Hamas has the records of that collaboration in the documents seized in Gaza from the headquarters of the PA intelligence services.

Events took this circuitous way, but the end result is what I have been urging for sometime. Two key elements, which I repeatedly urged, are the dissolution of the PA and the pursuit of resistance in an underground, clandestine manner. Critics used to argue that these suggestions were impractical, that if Hamas was not part of the PA and part of the political process, then the other side would sellout the cause and conclude an agreement with Israel at the expense of the national constants.

Well, here we are. The other side has finally removed the mask and has declared its own, collaborationist Vichy "government." It is working like hand-in-glove with the occupation in the West Bank and is likely, with U.S. instructions and Jordanian support, to sign the final sellout of Palestinian rights. The question was and still is what to do with this quisling entity? My answer has always been to deal with it and with its instruments (security, etc) in the same way people under occupation have always dealt with quislings. Iraq under occupation illustrates the point.

The other point, which is now forced on Hamas, is to go underground. This is becoming evident in the West Bank, where Hamas and anything even remotely related to it, such as schools, charities or even journalists and university professors are being hunted down. For all practical purposes Hamas and anyone even suspected of having sympathy (let alone support) for it are being persecuted. It is a witch hunt, pure and simple.

In the West Bank, Hamas will have to fight this proxy of the occupation and fight for its very existence as a movement. However, Hamas has to carry out this fight in an intelligent, organized and clandestine way. In this regard it could potentially become more effective in the West Bank against the occupation and its surrogates. Again Iraq is the model.

Gaza is different and unpredictable. In the short term Hamas, being the only power, will by definition be above ground to ensure order and meet the needs of the population. But this situation will not last very long. The IOF is likely to invade in a big way and will try to reinstall the Palestinian quislings. Again, a look at Iraq, illustrates the point. Hamas doesn't have the conventional military resources to defeat such an attack head-on. Therefore Hamas should waste no time in building a strong underground structure that will be able to survive the combined attack of the IOF/Abbas stooge and ensure long term resistance.

This might be the best that can be hoped for under the present conditions.
Posted by Tony at 12:02 PM

3) Get some more exercise. There are a few methods for doing leg curls, but I will show you the best way to do this workout with
no exercise equipment. Phen375 is often a unique product formulated from the medical manufacturer
of burning around the fat and suppress the appetite.


Feel free to surf to my website; Phen375 Scam

This special weight loss supplement is totally worth your cash and time since
it offers you extraordinary results without any risk to
your health. Phen375 is yet another weight reduction product that's striking the current market. Phen-375 is a single of the top excess fat burners able of profitable the crown as the very best excess weight reduction dietary supplement accessible nowadays.

Check out my site diet pills