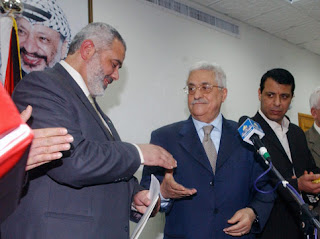 ".....According to the Basic Law, Abbas has violated a whole stream of Articles as well as the spirit of its checks and balances, which were designed during the Arafat era partly to limit the power of the presidency. With full US and Israel support (if not their insistence), Abbas has baldly trashed numerous provisions of the Basic Law, including:

* The President can sack his Prime Minister (Article 45) but he cannot legally appoint a new Prime Minister that does not represent the majority party (i.e., Hamas).

* In the event that a President sacks the PM, the Government is considered to have resigned (Article 83), but the serving Cabinet (here, the Hamas-led Cabinet) is supposed to govern until a new Cabinet is confirmed by the Legislative Council (Article 78).

* The President can rule by degree during emergencies (Article 43) but the Legislative Council must approve all these decrees at its first meeting.

* The President cannot suspend the Legislative Council during a state of emergency (Article 113).

* The President has no power to call early elections, either.

* The Basic Law has no provision whatsoever for an "emergency government."

What does this mean for the PA? It is no longer the same animal. The Fayyad government is the step-child of an extra-legal process with no democratic mandate. The whole manoeuvre is not precisely a palace coup, but it is something like it......

In short, the diplomatic landscape is now in utter disarray. The Fayyad Government has no democratic mandate, is not operating by the very rules that establish its democratic legitimacy, and so is only a facsimile of the 'government' with which many of the world's states established diplomatic relations. It does not help that the United States, an obedient Europe, and legless Arab states have trotted up to anoint it as the sole legitimate authority. Nor does it help to pretend that Hamas -- a broad movement with popular legitimacy -- will simply disappear through decrees from Abbas and some nice political theatre.

It is not clear how long this flimsy diplomatic pretense can hold up to scrutiny by a skeptical world. Nor is it clear what political costs foreign governments will have to absorb if they try to play along with it -- especially when the now-traumatized Palestinian people, in the territories and in Diaspora, begin protesting their government's being hijacked by anti-democratic figureheads for Israeli and US agendas. Being targeted as supporting this pantomime government was not the goal of those governments who recognized the PA to support the Palestinian people. As UN official Alvaro De Soto put it in his eloquent 'End of Mission Report' this May, 'It may be better to be the one who raises questions about the Emperor's new clothes than to be ridiculed as the naked Emperor oneself.'"
Posted by Tony at 2:27 PM