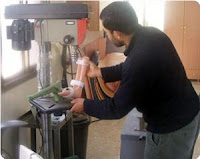 "NABLUS, (PIC)-- Adly Ya'ish, the Nablus mayor, has charged that the Fatah mutineers' assaults on the Nablus municipality building last week only harmed their own image.

Ya'ish, who is held in Israeli detention, said toppling legitimacy is not in favor of anyone, but rather would harm the image of those doing it.

The mayor, who was visited by lawyer of the Nafha society defending prisoners and human rights, also denounced those elements' sabotage in the city of Nablus.

Meanwhile, armed Fatah elements on Saturday destroyed the sole Palestinian factory for artificial limbs in Qalqilia. Eyewitnesses told PIC that a number of those mutineers smashed their way into the factory and destroyed all its equipment and raw material. Preliminary estimates said that the losses were near to half a million dollars.

The Qalqilia rehabilitation society, which owns the factory, denounced the "serious precedence", and described it as a "cowardly act". The society's administration pointed out that the factory extended services to the disabled in the West Bank and Gaza Strip in addition to Palestinian living in the 1948 occupied lands and was established with international funding over a year ago."

Do you see the beginning of Israel's campaign of "creative destruction" at work? Soon, University professors, journalists, religious leaders and various opinion makers will start disappearing. Iraq is the model; mark my words.
Posted by Tony at 9:08 AM