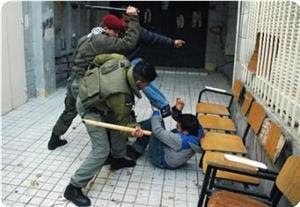 "NABLUS, (PIC)-- Hamas Movement has unequivocally urged PA chief Mahmoud Abbas to immediately stop the ongoing “farce” of arresting Hamas cadres at the hands of his security men in the West Bank.

According to Hamas records, more than 120 Hamas cadres in the West Bank were arrested so far and thrown into the PA jails, which revived the old PA security policy of political detention that was superseded and buried by the Aqsa intifada in the year 2000.

“Families of the kidnapped Hamas cadres were denied visits to their sons in the PA jails amidst growing fear for their fate as they weren’t charged or brought to courts for trials’, a statement issued by Hamas and a copy of which was obtained by the PIC affirmed.

According to local citizens, Abbas’s forces storming of Palestinian homes during the night was worse than the IOF raids in the West Bank as masked armed security forces of Abbas didn’t pay respect to the sanctity of the Palestinian homes and families.

Hence, the Movement held Abbas and national and Islamic Palestinian factions responsible for the safety of the arrested citizens in PA jails........"
Posted by Tony at 4:22 AM