In Iraq, 'Lawrence' is a must read 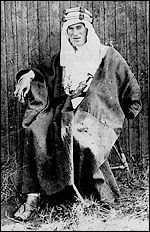 "CAIRO – In the spring of 1920, British occupation forces were tied down by an Iraqi uprising that began in Fallujah. British biplanes had rained bombs down on insurgent- occupied towns while ground forces had gone house to house confiscating weapons at the cost of thousands dead.

By August, British generals said they had the uprising well in hand. But a retired British colonel dissented, writing an article for The Times of London that was sharply at odds with the triumphal tone of officers and civilian administrators.

"The people of England have been led in Mesopotamia into a trap from which it will be hard to escape with dignity and honour,'' he wrote from the country. "Things have been far worse than we have been told.... We are today not far from a disaster."

The author was Lt. Col. T.E. Lawrence, better known as Lawrence of Arabia. And his letters are getting a fresh airing as US commanders in Iraq, military historians, and journalists reach for understanding as to the challenges the US is facing in the country......."
Posted by Tony at 3:33 PM