Iraqis to Bush: “You have left us with nothing” 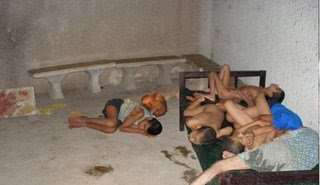 A Powerful Article
By Mike Whitney

"......The Iraq war is no accident. It is the logical consequence of a corrupted system where all the protections for human rights and civil liberties have been abandoned. All that’s left is the voracity and bloodlust of an unelected oligarchy who dispense death and destruction with complete indifference. Democracy has been subverted in America---every part of the body-politic is diseased. The war is just a reflection of America’s moral degeneracy.

Am I being too harsh?

Consider this article which appeared on uruknet.info this week. It provides photos of 24 "special needs" children who were found naked, starving and lying on concrete floors, in their own excrement---their bodies covered with sores. All of them were chained to their cribs. Some of them were near death. This is the Nazi-like terror we have unleashed on Iraq under the rubric of "democracy". This is what "neoconservatism" looks like when it is stripped of its ideological pretense and we can see its true face---pure, unalloyed evil. It is no different than Hitler’s fascism.
We are starving and brutalizing children while we extol the "America’s fallen" as if one life is more valuable than another. What sort of sick joke is this? This is nothing more than cultural narcissism served up by pseudo-patriots in the political establishment who are drunk on death and power. They worship violence like a god and they are pushing us all towards Armageddon......

The US invasion has turned Iraq into a testing-ground for new theories on counterinsurgency. One by one the cities in the Sunni region have been surrounded with razor-wire; vital supplies have been cut off, check-points set up, snipers placed on rooftops, and the siege begins. Civilian neighborhoods are branded as "terrorist strongholds" and pounded with heavy artillery and aerial bombardment. We have declared war on some of the poorest people on earth—ghetto warfare with the most sophisticated high-tech weaponry ever invented.

Who will tell these peoples’ story? The New York Times? FOX News?

Here’s something you won’t read in the mainstream news: The real disposition of the war changed more than two years ago when it became apparent that the Iraqi resistance would not simply throw down their weapons and give up. That’s when the assassination of teachers and intellectuals went into high-gear. That’s when archeological sites, museums, and anything else connected to Iraqi cultural and historical identity—began to come under relentless and withering attack. The attacks on holy sites and mosques have persisted to this day. There is a conscious effort to destroy all the religious symbols and monuments which bind the people together in the shared experience of a common faith.

The same sinister forces which are inciting the sectarian violence are trying to remove all sense of kinship, brotherhood, nationalism and spirituality. Their objective is to "wipe the slate clean" and rebuild the entire society according to their neoliberal model.