Letter from a Palestinian Camp 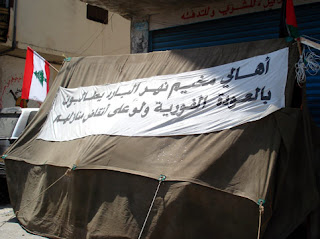 "......For 59 years Palestinians have been waiting to return to their rightful homes in Palestine under UN Resolution 194. They have waited for this right in Palestinian refugee camps in occupied Palestine, Jordan, Syria, Lebanon as well as in the diaspora. By comparison refugee camps in Lebanon and restrictions on Palestinians in Lebanon are worse than the conditions in Jordan, Syria, and in some respects to those in occupied Palestine. But for all of these Palestinians King's words ring true; Palestinians have waited far too long for their rights within the national spaces in which they reside and under international law.

I had the opportunity to address my concerns about the treatment of Palestinians in Lebanon directly to Prime Minister Fouad Siniora last week in a meeting at the Grand Serail with other relief workers from the United Nations Development Programme (UNDP), United Nations Relief and Works Agency (UNRWA), Palestine Red Crescent, International Committee of the Red Cross, American Near East Refugee Aid (ANERA), United Nations Children's Fund (UNICEF), Lebanese-Palestinian Dialogue Committee (LPDC) and a governmental group called the Emergency Relief Committee. Throughout the meeting I had the desire to stand up and read King's "Letter from a Birmingham Jail" -- just changing the words to fit the circumstance in Lebanon.

.....Throughout the meeting Siniora asserted that he wanted to rebuild Nahr al-Bared and create "a model camp." That the notion that destroying a camp and slaughtering the people residing in that camp merely to rebuild it is immoral and inhuman seems to be irrelevant here. It does not seem to occur to him that predominant feeling among Palestinian refugees from Nahr al-Bared, who are now thrice or twice displaced as many used to live in the destroyed Tel al-Za'atar camp in Lebanon, believe that any promise by the government is not in earnest (the part of Nahr al-Bared camp where people from Tel al-Za'atar lived is now destroyed). They remember all too well the destruction of camps in Nabatiyeh and Tel al-Za'atar which were never rebuilt. They recall their multiple displacements in Lebanon and the current situation elicits memories of trauma and homelessness. But Siniora insists he wants to rebuild and that the people who are now rendered homeless will have to wait.......

The promise that Siniora will make Nahr al-Bared a "model camp" is as meaningless to refugees from Nahr al-Bared as is his statement that, "We want to reestablish levels of confidence between Lebanese and Palestinians. Let's make this camp a model of re-cooperation and confidence building." In response to this statement I challenged Siniora about his commitment to Palestinians, specifically in light of the contradiction between his idea of "confidence building" and Lebanese security concerns. I remarked that Lebanese security cannot be built on Palestinian insecurity, especially in light of increasing testimonies by Palestinians who have been subjected to harassment, detention, humiliation, and brutality by the Internal Security Forces (ISF) and the army........

The cycle of violence is only bound to enlarge and increase before subsiding if these practices of humiliating, detaining, and beating Palestinians and Syrians does not cease. I still have questions for Siniora, including the many which I excerpted here and which he failed to answer directly. First and foremost: are we willing to sacrifice other people's rights for what we want right now? Does that make it justifiable? When will we understand that what never works is to sacrifice other people's rights -- and never our own? When will we learn that these practices of collective punishment and detention merely play right into the US and Israel's hands and do nothing to further a secure Lebanon nor Palestinians' right of return?"
Posted by Tony at 6:28 PM