Another assassination in Ramallah's city center 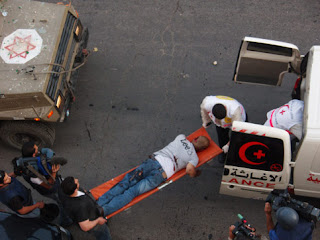 "It was a good day today, well, that is until about 5:40pm when Israeli undercover and military forces assassinated a Palestinian outside the window where I was standing.

The target was Omar Abu Daher, a 22-year-old who it seems happens to be a member of a security force loyal to Palestinian Authority President Mahmoud Abbas. He was only one of several that were murdered in cold blood today; two more were killed in Gaza, one in Tulkarem, two others in Jenin. These are the ones reported so far, but the night is still young.....

On my way home, I passed the Presidential Compound on Radio Street. This is Mahmoud Abbas's headquarters. Only a few hours before it was reported in the news that he announced that he will meet with Israeli Prime Minister Olmert on June 7 to discuss the 'peace process.' Alone, I just shook my head and wondered for how long can this Palestinian President, this Palestinian Authority Government, and this Palestinian Legislative Council continue to go through the empty motions of governance under military occupation, while Israel, with full internationally-sanctioned impunity, assassinates Palestinian citizens -- those very same security personnel that are supposed to hold the peace -- in broad daylight, arrests dozens from their beds every night -- including ministers, mayors and legislators -- and prohibit millions of Palestinians whom they have displaced from returning to their homes.

I guess the more accurate question I should be asking myself is until when will the Palestinian people continue to accept such inept leadership?....."
Posted by Tony at 10:54 AM