Lebanon and the Planned US Airbase at Kleiaat 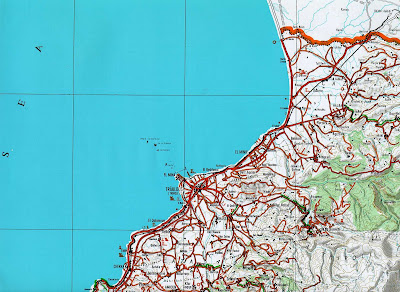 ".....As residents of Bibnin Akkar, less tha two miles from the site of the proposed US base and the Lebanese daily newspaper Aldiyar speculate, construction of a US airbase on the grounds of the largely abandoned airbase at Klieaat in northern Lebanon may begin late this year. To make the project more palpable, it is being promoted as a 'US/NATO' base that will serve as the headquarters of a NATO rapid deployment force, helicopter squadrons, and Special Forces units.

The base will provide training for the Lebanese army and security forces fighting Salafi, Islamist fundamentalists and other needs.

The Pentagon and NATO HQ in Belgium have given the project which, will sit along the Lebanese-Syrian border, using this vast area "as a base for fast intervention troops", a name. It is to be called The Lebanese Army and Security training centre"......

As reported by the NATO headquarters in Brussels, as well as by residents in Bibnin Akkar on May 28, 2007, an American-German-Turkish military delegation toured and surveyed Akkar region. US Embassy 'staff' have reportedly visited Kleiaat airport earlier this year to look over the site. David Welch also had a quick look at the site during his recent visit.

A Lebanese journalist who opposes the base commented on May 28, 2007, "The Bush administration has been warning Lebanon about the presence of Al Qaeda teams in northern Lebanon. And the base is needed to deal with this threat. Low and behold, a new "terrorist group" called Fatah al-Islam appears near Kleiaat at al-Bared camp".....

Contenders for the billion dollar project, according to the Pentagon procurement office could be Bechtel and Halliburton and other Contractors currently doing projects in Iraq......

According to Washington observers watching developments, the base has been pushed by elements in the office of the US Secretary of Defense and the Joint Chiefs of Staff at the urging of Israeli operative Elliot Abrams. AIPAC can be expected to do the necessary work in Congress and with House Foreign Affairs, Appropriations, Intelligence, and Armed Service committees hermetically sealed by stalwarts of the Israel Lobby, it can be expected that it will be added as a rider to an unsuspecting House bill coming along.

"We need to get this base built as quickly as possible as a forward thrust point against Al Qaeda and other (read Hezbollah) terrorists", according to AIPAC staffer Rachael Cohen. Asked if Israel will offer training and advisors to the Lebanese army, Ms. Cohen replied, "we will see what we will see, Lebanon, smezzanon its not about them, its about stopping the terrorists stupid!"

"The question for Lebanon is whether the Lebanese people will allow the base to be built. Few in North Lebanon doubt that Israel will have access to the base " according to Oathman Bader, a community leader who lives in Bahr al-Bared but has fled to Badawi......

According to a columnist at Beirut's Al-Akbar newspaper," a US project like that would split Lebanon apart. No way will Lebanon allow it. Probably every group in Lebanon would oppose it , from the Salafi, Islamists fundamentalist to moderate Sunnis to Hezbollah. Can you imagine the Syrian reaction?"......"
Posted by Tony at 8:38 AM