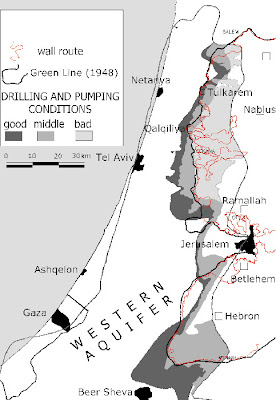 (Clemens Messerschmid has been living and working since 1997 as a hydrogeologist in Ramallah. His assignments include work at the German Water Supply and Sanitation Development Projects Palestine (WSSDPP), by GTZ (1997-2001) and as Research and Co-ordination Advisor in PWA for the project "The Sustainable Management of the West Bank and Gaza Aquifers" (SUSMAQ), funded by DFID and in collaboration with University of Newcastle upon Tyne and the British Geological Survey (2001-2004). He currently works as a freelance water consultant in the Middle East.

"The main water objective of the wall is not to steal a handful of wells, but to prevent any future expansion of Palestinian capacity to mine the Western Aquifer. That is the purpose of the facts on the ground currently being created. Once those facts have been created, they will make it impossible for Palestinian society in the fertile regions along the former Green Line to know any form of development, or even a return to something like their former 'normal' life. Hydrology expert Clemens Messerschmid analyzes the impact the northern section of the wall will have on Palestinians' access to water....."