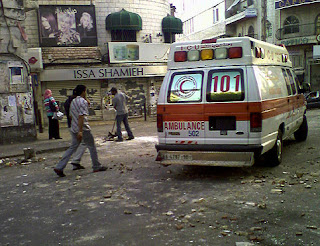 Debris litters the streets of Ramallah after an undercover Israeli death squad shot a 22-year-old man 24 times at close range, an event which was not reported by the mainstream press. (Elias Khayyo)

Ali Abunimah writing from Chicago, USA, Live from Palestine, 30 May 2007

"Reading an account of an Israeli cabinet meeting in Ha'aretz is like a trip through a House of Horrors. Here are some choice excerpts:

"Ministers Meir Sheetrit and Rafi Eitan proposed Wednesday that Israel produce its own version of the Qassam rocket to be fired at targets inside the Gaza Strip in response to Palestinian rocket fire on its southern communities."

"Minister of Industry, Trade and Labor Eli Yishai of Shas proposed that Israel use air strikes to destroy Palestinian towns and villages in response to the rocket fire, after giving local residents advance notice allowing them to evacuate their homes."

"Shas MK Yitzhak Cohen proposed cutting off the supply of electricity, water and fuel to the Strip, and justify the move by saying that Qassam rockets had destroyed Israel's infrastructure and that it will take a long time to repair the facilities with which to supply the Palestinians with basic resources. Shin Bet security service director Yuval Diskin suggested that Cohen's idea is worth examining."

This is the state that is supposed to be the conscience of the world following the Nazi holocaust? Which other government could openly hold such discussions to such overwhelming silence from the so-called "international community"?

For weeks, Israel has bombed the Gaza Strip killing dozens. In one such attack, on May 20, Israel bombed the house of a democratically-elected legislator Khalil al-Haya, killing eight people, including seven members of his family -- among them three teenagers. B'Tselem called for a criminal investigation, but the issue has been long forgotten by the rest of the world.....

Yesterday, an Israeli death squad carried out a cold blooded execution of a 22-year-old man in the center of occupied Ramallah. After shooting him in the leg, he was finished off with a bullet to the back of the head. He was then riddled with a total of 24 bullets. This brutal murder did not even make the news in the US......

Ronnie Kasrils, South Africa's minister of intelligence, and an ANC veteran of the anti-apartheid struggle wrote on May 21 "Travelling into Palestine's West Bank and Gaza Strip, which I visited recently, is like a surreal trip back into an apartheid state of emergency." Except, adds Kasrils, it's a situation "infinitely worse than apartheid" (Mail & Guardian)......"
Posted by Tony at 10:59 AM