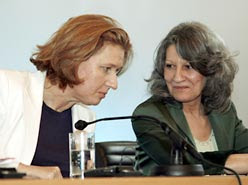 "Foreign Minister Tzipi Livni attended a conference of women leaders on Thursday in Vienna, Austria, where she met with women from all parts of the Arab and Muslim world, including first lady of Iraq, Hero Ibrahim Ahmed Talabani.

Talabani and Livni spent several minutes discussing the peace process while they participated in a panel on the topic.....

"There is much better understanding that Middle Eastern politics is not a zero-sum game," Livni told the panel. "Nations in the region face common threats," she added. Livni commended the Arab League's initiative which is aimed at normalizing relations with Israel. "Normalizing relations now will help advance the political process," she said.

During the conference, Livni also met with Pakistani Minister for Women's Development, Sumaira Malik. The two spoke informally and warmly in the lounge. They discussed the need to broaden the range of nations who supported and aided the political process to include Islamic nations such as Pakistan and Indonesia rather than exclusively Arab nations.

"The whole world's involvement in the peace process should be strengthened," the Pakistani minister said......"
Posted by Tony at 2:04 PM