'We have no rights and no future' 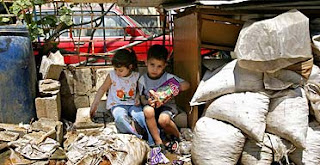 The standoff between the Lebanese army and Islamic militants has focused attention on the 400,000 Palestinian refuges in the country

"......In the teeming streets of Shatilla camp, the scene of a notorious civil war massacre, malnourished children play in little more than rags between crumbling bullet riddled buildings and amidst open sewage.


"We have no rights and no future. We have a lot of problems; We can't work freely, we cannot own a house, we cannot move around. We are treated as if we are not human," said 20-year-old Samar, from Shatilla......

Whatever happens in the Nahr al-Bared camp, Palestinian leaders hope that the attention attracted by the crisis will lead to a recognition of the grim and hopeless life that many of them have lived for more than half a century......

Initially, they lived in tents that were slowly replaced with primitive breeze block structures with zinc roofs. Now conditions in many of the "camps" have deteriorated while their populations have multiplied.


"The borders of the camp are fixed and it is illegal for us to build on the edge of the camp," explains 30-year-old Rabieh from Ain al Hilweh, Lebanon's largest camp. "The areas were very small to begin with but as the population has increased over time, people have been forced to live closer and closer together."

Young men in the camps describe how they are harassed and beaten by the Lebanese security services. "The internal security forces are always aggressive if they know you are Palestinian," said Rabieh. "Sometimes guys are dragged off and beaten just because they have a certain family name."

"They live under permanent pressure and there is despair," said Sybille Bikar, who works on the refugee issue in Lebanon for the European commission. "They feel they live in a very hostile world."

The refugees do not enjoy citizenship and are restricted in the work they can do and where they can live, as they are not entitled to buy property. A government ordinance stretching back to 1982 prohibits them from work in many of the main professions and, as a result, unemployment is high. Many of the women working in service professions and the men in agriculture, while others have left Lebanon in despair to find work outside the region.

"In terms of living conditions, Lebanon is the worst place for Palestinians outside Gaza and the West Bank," said a western diplomat. "They are better off in Syria."......
Posted by Tony at 8:48 PM