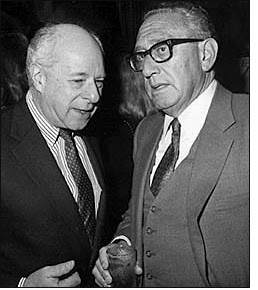 "In normal, non-Bushzarro times, a man calling for mass murder would be held in contempt, not held up as an example of the political mainstream and heralded as a “distinguished author.” However, as we are well astride of the Bushzarro era, Norman Podhoretz is provided with a venue—for the proper audience, of course—to advocate the destruction of Iran and the murder of possibly thousands of its citizens. “I believe,” Podhoretz told the Israel Broadcast Authority on May 24 (see video below), “contrary to what many people assume, that [Bush] will [attack Iran] before he leaves office, possibly shortly before he leaves office,” thus leaving the political fallout to the incoming president, more than likely a Democrat. “I think he agrees with the analysis that I offer that there is no alternative to military action.”

Of course, in order to sell this invasion of a sovereign nation, based on illusory claims the mullahs of Iran are in the process of building a nuclear bomb to use against Israel—a crackpot theory but one that remarkably has gained a degree of credence in the United States—Podhoretz and the neocons have erected an elaborate if preposterous edifice to support their Brothers Grimm fable about Iran.

“As the currently main center of the Islamofascist ideology against which we have been fighting since 9/11, and as (according to the State Department’s latest annual report on the subject) the main sponsor of the terrorism that is Islamofascism’s weapon of choice, Iran too is a front in World War IV. Moreover, its effort to build a nuclear arsenal makes it the potentially most dangerous one of all,” Podhoretz writes for the June issue of Commentary Magazine. “I call this new war World War IV, because I also believe that what is generally known as the cold war was actually World War III, and that this one bears a closer resemblance to that great conflict than it does to World War II. Like the cold war, as the military historian Eliot Cohen was the first to recognize, the one we are now in has ideological roots, pitting us against Islamofascism, yet another mutation of the totalitarian disease we defeated first in the shape of Nazism and fascism and then in the shape of Communism; it is global in scope; it is being fought with a variety of weapons, not all of them military; and it is likely to go on for decades.”

In March, Eliot Cohen was appointed by Secretary of State Condoleezza Rice to serve as Counselor of the State Department, thus the very contagion of the neocon disease now resides at the highest office.......

Finally, the Podhoretz appearance on Israeli television and his avowed declaration Bush will certainly invade Iran arrives less than two weeks after out-going United Nations ambassador John Bolton told the Daily Telegraph “Iran would be as dangerous as ‘Hitler marching into the Rhineland’ in 1936 and should be prevented by Western military strikes if necessary…. The Pentagon has drawn up contingency plans for military action and some senior White House officials share Mr Bolton’s thinking.” "
Posted by Tony at 6:56 AM