Time to cut Israel off 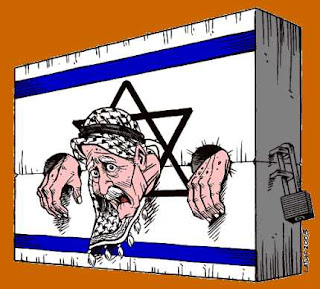 "South Africa's Minister of Intelligence Ronnie Kasrils whispered to me as I sat down following a most enthusiastic speech I gave at a recent conference in Cape Town: "if you want the world to heed to your call for boycotting Israel, the call has to originate from the Palestinian leadership itself."

Kasrils is obviously right. The call for boycotting the racist Apartheid government was an exclusively South African endeavour, made resonantly and repeatedly by the African National Council (ANC) and backed by the various liberation movements in the country and in exile. It took years for the dedicated campaign to be effective. The message communicated to the international community was clear and simply persuasive: put an end to Apartheid. It was but only a facet of various methods of struggle, notwithstanding the armed struggle which spread to Namibia, Angola and other African countries......

A young Indian activist, who spent days on end urging shoppers at Britain's Marks and Spencer, to boycott the store for contributing to the Israeli occupation, recalled her utter frustration with the fact that many of the store's customers were Arabs from the Gulf. While nothing beats a good deal, she failed to understand why a wealthy Arab would find it morally permissible to patronise a company that contributed to the occupation. Needless to say, the same scenario is repeated at many Starbucks branches, despite the corporate management's unabashed support of Israel......

Should we wait for the Palestinian leadership, some of whom are in the process of complete capitulation, while others are struggling for basic survival and limited to an exclusivist political ideology, to cease their infighting, unify their ranks, rehabilitate their political institutions and only then call for boycott? The wait might be too long and arduous......"
Posted by Tony at 8:54 PM