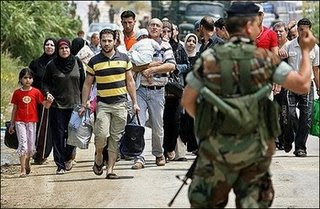 ".....It is not just Bedawi that is now sheltering the families who have been fortunate enough to escape the besieged and death-strewn streets of Nahr al-Bared Camp. Families have fled as far south as Beirut and some say even further. Shatila, witness to its own massacre, is now opening its homes to the 153 families who have so far arrived there. Aid is funneling into Bedawi but nothing is yet reaching Shatila. Many of the families here have escaped without so much as their IDs on them.

In Bedawi the injured and the well share the same piece of bread; in Shatilla the wife is without her husband and shares the same mattress as her three or four children, and often no mattress at all.

Many who have fled have no way of knowing how their men-folk are, still stuck within their besieged Camp. One woman told me how the last thing she saw as she left with her baby was her husband bleeding from a gun shot wound to his shoulder. She was weeping as she told me she couldn't help wondering if she would ever see him again......

An explosion of anger in all the Palestinian camps against the government and most importantly against the Lebanese Army which has proved it is the only institution in the country that over the past four months has kept civil war at a tentative distance. If the Lebanese Army is ordered to storm the camp they will loose the respect that most factions in this country have for them......

So far the only leader of a political faction in the country to speak out against such an action as the storming of the Camp has been Hassan Nazrallah, the leader of Hezbollah, defamed in the West as a 'Terrorist Organization'.....

There is a third militia inside the Nahr al-Bared Camp. Residents sheltering there tell of this third militia who will fire towards the Lebanese Army and then Fatah al-Islam during a cease-fire and ignite the shooting again No one knows for sure who these militia are but some say that this group is connected to the militia of Hariri.......

Who can support a government which accepts US Arms to attack a Palestinian camp inside which half the residents are still besieged? (The same 'gift' that Israel accepts every year and used last summer to wipe out half of this country).

And it's got nothing to do with Sunni or Shia this time. Sunnis inside the Camp are being sacrificed by their Sunni Government and the leader of the Shia community is calling for their protection......"
Posted by Tony at 9:03 AM