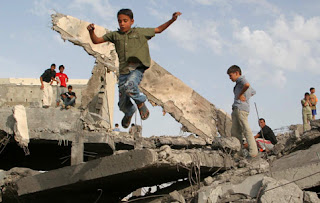 Ali Abunimah writing from Chicago, USA, Live from Palestine, 31 May 2007

"....... Just when I thought it couldn't get worse, I read a news article on the website of The Jerusalem Post that Israel's former Sephardic Chief Rabbi Mordechai Eliyahu -- one of the most senior theocrats in the Jewish State "ruled that there was absolutely no moral prohibition against the indiscriminate killing of civilians during a potential massive military offensive on Gaza aimed at stopping the rocket launchings" ("Eliyahu advocates carpet bombing Gaza," The Jerusalem Post, 30 May, 2007).

The Jerusalem Post reported that Mordechai made this ruling in a letter to Israeli Prime Minister Ehud Olmert citing biblical authority. The letter was published in a weekly journal distributed in synagogues throughout Israel. The report states that "According to Jewish war ethics, wrote Eliyahu, an entire city holds collective responsibility for the immoral behavior of individuals. In Gaza, the entire populace is responsible because they do nothing to stop the firing of Kassam rockets."

This kind of genocidal hatred of Palestinians is not unusual in Israel. What used to be unusual was for it to be spoken so brazenly and openly. Of course we know what would happen if a Muslim or Palestinian religious figure made such a statement......

Under the Convention on the Prevention and Punishment of the Crime of Genocide adopted in the wake of the Nazi holocaust, "Direct and public incitement to commit genocide" is a punishable act. One wonders whether the UN Security Council, which created an international tribunal to investigate the killing of one man in Lebanon, will pay any attention to the indiscriminate state- and theocratically-sanctioned massacres of Palestinians by Israel.

Will Hillary Clinton, who continues to defame Palestinian schoolchildren with the lie that they are taught "hatred" in their schoolbooks, or any of our other pandering candidates, take a moment out from praising Israel to condemn Eliayahu's statement? What about Oprah Winfrey, who at the invitation of Elie Wiesel is to undertake a "solidarity" visit to Israel?

It seems there are no moral restraints left in Israel. It is right and proper that such a regime be isolated with boycott, divestment and sanctions until it desists from its racist -- and potentially genocidal -- practices. It is to be celebrated that an increasing number of individuals and organizations understand this: yesterday the governing body of the UK's University and College Union voted overwhelmingly to support a boycott of Israeli academia. Today UNISON, the UK's largest public service union announced it will vote on similar motions at its next congress. As Israel's house of horror grows, so does the movement to confront it. In that there is great hope."
Posted by Tony at 9:32 PM