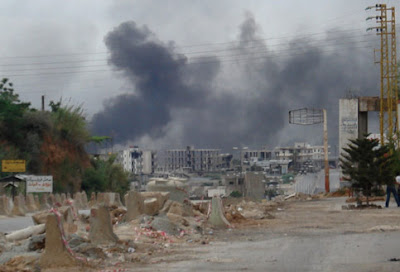 When we finally reached Badawi camp to deliver the medicine we were learned that one refugee from Nahr al-Bared camp, who passed through a checkpoint earlier today, was told by a Lebanese soldier, "I hope that we can round up all the Palestinians, throw benzene on you, and light a fire." This is a truth that Lebanon does not want told. These are the stories that must be told and they far outweigh and out number the story of one prominent, wealthy Lebanese leader's international tribunal.

By Dr. Marcy Newman writing from Beirut, Live from Lebanon, 2 June 2007
(Dr. Marcy Newman is a Visiting Professor at the Center for American Studies and Research at the American University of Beirut and a Fellow at the Initiative for Middle East Policy Dialogue)

".......Since early morning U.S. weapons have bombarded the Nahr al-Bared refugee camp in northern Lebanon, though no one can get a clear idea about what exactly is happening there. On the news we watched bombs going off every few seconds all day long with huge clouds of black smoke smoldering in the sky.......

We saw a crowd of photojournalists who had also been stopped by the army. They were prohibited from shooting film footage of what was going on in the camp and were forced to stay some two to three kilometers from the area where the army was directing its new U.S. donated artillery. Some reported being shot at by the army earlier in the day. All of them (Lebanese and internationals alike) complained of the army inhibiting them from telling the story of what is actually happening in Nahr al-Bared refugee camp. For a country with signs declaring "the truth" everywhere you look it seems rather ironic that journalists are prevented from witnessing the events unfolding before them.

Throughout the day we heard that two Lebanese soldiers were killed and that twelve "terrorists" were also killed. How they know these figures is perplexing, but what is particularly disturbing is that somehow the fact that 15,000 Palestinians still trapped inside this camp are completely absent from the news coverage of the story inside Lebanon (and I gather outside as well). Somehow the fact that there will be Palestinian civilians indiscriminately killed because of this incessant bombing escapes the media's attention......"
Posted by Tony at 1:08 PM