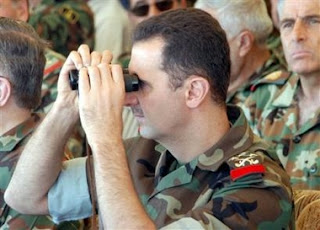 "Syrian President Bashar Assad won 97.62 percent of the vote in a referendum that confirmed him for a second 7-year term, Interior Minister Bassam Abdel Majeed said on Tuesday.

"This great consensus shows the political maturity of Syria and the brilliance of our democracy and multi-party system," Majeed told reporters.

"There has been some repetition of votes but we caught them by reviewing the voting lists," Majeed said in response to a question about the possibility of vote-tampering.

Assad was the only candidate allowed to run in Sunday's referendum, which had been widely regarded as a formality and boycotted by the opposition.

The 41-year-old president won 97.29 percent of the vote when he succeeded his late father, Hafez al-Assad, seven years ago......."

His father used to do better by getting over 99% of the "vote;" but Asad II is consistent by getting over 97%. Not bad for a kid whose "only" asset is being the son of the former dictator.
Posted by Tony at 5:08 AM