Masked gunmen and roadblocks reappear in the Gaza street 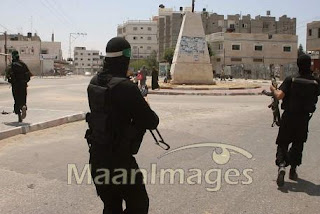 Following the incident, roadblocks appeared anew in the streets and gunmen began inspecting cars. Furthermore, gunmen stationed themselves again on the roofs of high residential buildings. Meanwhile, the Follow-Up Committee hurried to convene in an attempt to return tranquillity to the city which has witnessed bloody internal confrontations over the past two weeks.

According to Israeli sources, Diskin added that the coming confrontations would be more bloody and on a wider scale, resulting in many victims.

On the other hand, Diskin admitted the Israeli army's failure to hit Hamas' military wing members. He said, however, that most of those who were assassinated so far were members of the Hamas-affiliated Executive Force.

The Shin Bet chief also expressed concern that if the Israeli army fails again to deter Hamas fighters, homemade projectiles would be launched again at Ashkelon and Netivot. He also refused to extend the ceasefire to the West Bank in exchange for the Palestinians halting their projectiles fired from the Gaza Strip at Israeli towns......."
Posted by Tony at 10:57 AM