"They won't let me be at peace, even in my dreams" 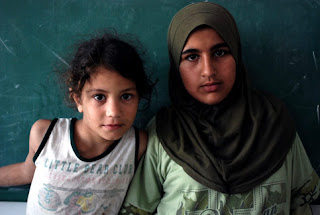 "I don't know where to begin. After spending two days in Chatila Refugee Camp, and a day in Beddawi, I find myself at a loss for words. How do I describe the conditions these Palestinian refugees are being subjected to when I never even conceived of the possibility of such unspeakable conditions. Again, I don't know where to begin. But I will try my best. I will try because all of the refugees we interviewed in our first day at Beddawi beseeched us to let the world know how their situation has quickly deteriorated in a matter of days......

And that's another thing. All the refugees were telling us how their homes had either been completely or partially destroyed. What this means is that many people's identity cards are buried under the debris and the refugees can't leave the camp and are forced to stay in a war zone. Of course, women and children have a much easier time of leaving the camp without these identity cards than men. But in the end, the refugees from Nahr al-Bared said, that it is the civilians who are taking the brunt of the shelling....."
Posted by Tony at 3:07 PM