Reporting from the front: Interviews with PLO spokesman in Lebanon and PFLP official (Part 1) 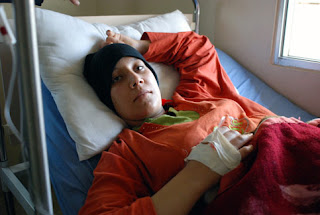 ".....As has been reported, this new influx of refugees has doubled the population in the Baddawi camp, and the social service sector within the camp has been stretched to the maximum -- medical assistance, food, water and other aid are slow in coming. This, analysts say, is a consequence of the push by Lebanon's government to officially join their western allies, namely the United States, in supporting the global "War on Terror" -- at the expense of humanitarian concerns.

Meanwhile, Palestinians throughout the other 11 officially registered Palestinian refugee camps in Lebanon are growing increasingly restless with what is becoming an untenable stance by the Lebanese leadership -- that of a consistent policy of indiscriminate artillery and tank shelling of the Nahr al-Bared camp in an effort to root out Fatah al-Islam.

For us, the aim in going to the Baddawi camp was primarily to talk to Palestinians in the mainstream leadership structures whose voices have been conspicuously ineffectual, even as the Lebanese Army has reiterated its stance of not negotiating with "terrorists," i.e. Fatah al-Islam -- leaving the Palestinian civilians caught in the crossfire......"
Posted by Tony at 12:18 PM